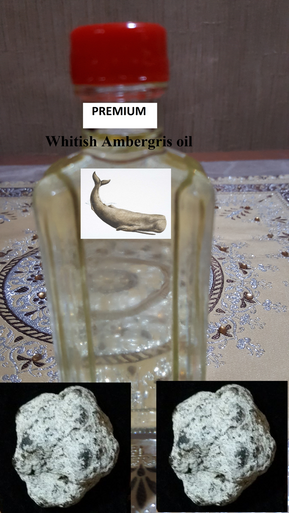 This is a 6 grams of sweet & high quality Premium Ambergriss non alcoholic oil made from whitish ambergriss from New Zealand area. Just a little drop will last for long time. The picture does not indicate actual quantity. It is pack in a full 6 grams dip stick bottle.

Ambergris, which comes from some species of sperm whale, is one of the most valuable raw materials in perfumery. It's rare, and the fragrance it exudes is just as rare. In perfumes ambergris is used as a fixative and its presence can be best described as marine, animalic and sweet. Ambergris has long been referred to as whale vomit. In earlier times, it was believed that the whale would vomit up this material from its stomach.

However, research in modern times would suggest that it primarily forms in the whale's intestines and would be excreted from the animal (rather than being vomited out from the stomach).

The dull grey or blackish waxy lumps largely consist of undigested squid beaks (the sperm whale's main prey is giant squid) and it is thought that it might help the mammal pass sharp objects through its intestine. It may float in the ocean for as long as 30 years before being washed-up. As it floats, a white coating forms on the outside as it oxidises in the salt water. In general, lighter-coloured pieces have a lighter, sweeter fragrance and have been at sea for a longer time.

Ambergris is used as a fixative to help scents last much longer and its perfume can be best described as marine, animal and sweet.

Despite this research, many people still refer to ambergris as whale vomit. Ambergris can float in the ocean for many years. We could not say what is the ultimate amount of time for a piece to cure but normally it would be desirable for the piece to float in the ocean for as long as possible (20 - 30 years). We could not estimate the precise age of a piece, according to the appearance. However, we can tell from several factors (the thickness of the white exterior coating, the interior color of the piece and the fragrance) if it is an older and well-cured piece. As a piece floats in the ocean, a white coating will form on the outside (oxidization from the salt water). This white coating can be thin and patchy but it will become thicker if the piece stays in the ocean a long time. The piece will also become lighter in color on the inside, as it dries and cures. The fragrance will also become lighter and more refined. In general, lighter colored pieces have a lighter, sweeter fragrance and have been in the ocean for a longer time. The texture of ambergris is normally hard. Only the lowest qualities have a soft (firm, pliable) texture. Pieces which are very old may become more brittle and powdery.

Historically, the primary commercial use of ambergris has been in fragrance chemistry, although it has also been used for medicinal and flavoring purposes. Ambergris is one of the most important amber type odorants and is highly sought.The Ambergris is produced by the Sperm whale and is present in of all the ancient pharmacopoeias. Ambergris has a very typical scent, animally but of great sweetness that seduces particularly feminine noses, who instinctively recognize the odour that will attract males. In fact, Ambergris, like all aromatic substances of animal origin, is a pheromone and acts directly on the hormonal system through the sense of smell, without physical contact.

The price is inclusive of a 9 to 15 days delivery of standard air mail to anywhere in the world. We are wholeseller for Ambergriss, Aloeswood, Santolum Album/Sandal wood, deer musks, frankinscene from Oman and pure Yemeni's Honey. We provide wholesale price for bigger quantities.

If you want faster delivery, purchase our DHL express shipment found in the "DHL" category