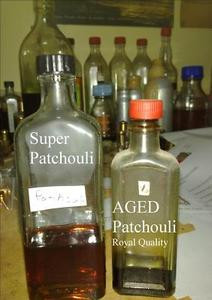 This is a 6cc of dark & rich & long lasting Patchouli essential non alcoholic oil that from the dense jungle of Indonesia. Patchouli (Pogostemon cablin (Blanco) Benth; also patchouly or pachouli) is a species from the genus Pogostemon and a bushy herb of the mint family, with erect stems, reaching two or three feet (about 0.75 metre) in height and bearing small, pale pink-white flowers. The plant is native to tropical regions of Asia, and is now extensively cultivated in China, Indonesia, India, Malaysia, Mauritius, Taiwan, the Philippines, Thailand, and Vietnam, as well as West Africa. The heavy and strong scent of patchouli has been used for centuries in perfumes, and more recently in incense, insect repellents, and alternative medicines. The word derives from the Tamil patchai (Tamil: ?????) (green), ellai (Tamil: ???) (leaf).[1] In Assamese it is known as xukloti. Pogostemon cablin, P. commosum, P. hortensis, P. heyneasus and P. plectranthoides are all cultivated for their oils and all are known as patchouli oil.