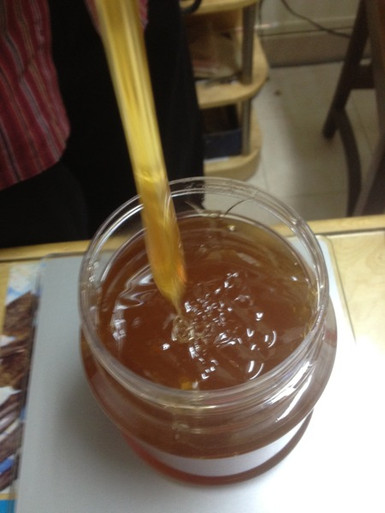 (Take note that this picture does not shows the axctual qty) This wild winter sidir honey is THICK, a monofloral, wildflower honey from Wadi Du'an, a small valley in Yemen. The honey has a unique buttery flavor, rich aroma and high viscosity-and known for its medicinal qualities. The honey is thought to be the perfect medicine to help women regain their strength after childbirth, men & women to recuperate, that a daily spoonful keeps them young and healthy, while young men believe that regular doses will help produce a male heir.

To appreciate this highly revered honey, one has to understand the story behind its tree.

The Sidr tree, (also known as Lote tree, Christ's Thorn, Jujube or Nabkh tree. Botanical name: Ziziphus spina-christi) is an ancient tree. The Jujube fruit was the first thing Prophet Adam ate when he was made to descend to earth. The tree was used during the time of King Suleiman (pbuh) and the Pharaohs to build palaces and temples.

All of its parts have medicinal values. Its leaves are used as a herbal shampoo, to treat dandruff, head lice, swollen eyes, abscesses, furuncles and counter obesity. Mixed with warm water the leaves are used to clean the body since they are a disinfectant and the oil from the resin is deodorant. Its wood ash is used for the treatment of snakebites. Its fruits are found to have a very high energy value. Its seeds are rich in protein; its leaves rich in calcium, iron and magnesium. The root, stem bark are also used in various medicinal preparations. Other known medicinal uses include as a stomachic, an appetizer, an astringent and also as a cough medicine.

Research done on different honeys confirmed that floral source, climate when the honey is being harvested and soil composition are all key factors in determining not only its flavor, colour or aroma but also its quality and effectiveness for medicinal or health-promoting purposes.

Another important factor affecting a honey's curative qualities is purity. Only crude, unprocessed honey has shown to be effective.

According to the UN Food and Agriculture Organization (FAO), Yemeni's Sidr honey is a hundred times more expensive than the other kinds of honey on the global market because of differences in their medicinal and nutritive benefits.

Yemen honey is in tremendous demand, particularly for its curative and nutritive benefits. Some are willing to pay large sums of money, up to USD800 per kg of honey, when supply is low!

According to the Egyptian historian al-Maqrizi (d.1441), the author of one of the few Arabic treatises on beekeeping, 'the whole of Yemen is a land of honey'. Beekeeping is deep-rooted throughout Yemen's history with a very old and rich tradition. It is an activity which has come down through time like an inheritance.

According to the UN Food and Agriculture Organization (FAO), Yemeni's honey is a hundred times more expensive than the other kinds of honey on the global market because of differences in their medicinal and nutritive benefits.

Some of the extraordinary qualities of the Sidr Honey

HIGHLY POTENT - Yemeni's beekeepers who are strict in ensuring the honeys purity and potency will allow their bees to die rather than feed the bees with sugary syrup. Typically, bees of a certain hive make 37,000 trips just to make half a kilo of honey but bees fed solely on the nectar of the Sidr flower die after making about 3 trips! The weaker bees cannot withstand the potency of the nectar of this remarkable tree.

ORGANIC - The Sidr trees are grown wild and uncultivated in the desert areas of Yemen.

RAW & PURE - In Yemen, the method of beekeeping has always been a traditional one. No chemicals or drugs allowed (in modern agriculture, chemicals and antibiotics are widely used to control mites and other bee diseases in the hives). No machinery used. All are done using their hands, a little smoke (from dried camel skins) and knives. The honey is then poured, unheated and raw, into containers, thus preserving its vital live enzymatic constituents.

NATURAL APHRODISIAC - This honey enhances sex and claimed to be better than Viagra, with no side effects.

MEDICINAL - Every drop of honey holds the spark of life. Our forefathers had understood honey's remarkable healing gift and had used it successfully in curing most diseases. Sidr honey has been reported to be good for liver problems, stomach ulcers, respiratory infections, diseases resulting from malnutrition, digestive problems, constipation, eye diseases, infected wounds and burns, surgical wounds (incl. caesarian), promote speedy recovery after childbirth, facilitates menstruation, (with various plants) it can be used against epilepsy, strengthened the immune systems, to promote general health and vitality.

ANTIOXIDANT - Antioxidants are important in counteracting the damage caused to the body by free radicals which play a role in the aging process and in triggering diseases such as arterial disease and cancer.

ANTIBACTERIAL - Medical science is rediscovering the effectiveness of honey in the use of alternative therapies in areas where the development of antibiotic-resistant bacteria (the "superbugs") spreads. Honeys may differ in the potency of its antibacterial activity thus affecting its healing abilities. Some honeys are no more antibacterial than sugar, while others can be diluted more than 100-fold and still halt the growth of bacteria.

The honey that is harvested during winter is best, followed by spring, autumn then summer.

The Sidr honey of Yemen tastes delicious, different from those of other regions because the soil of Yemen is richer and this influences the flavour.