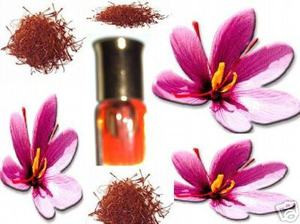 This price is inclusive of shiping (registered mail) to anywhere in the world. This is 3cc / grams of pure Saffron Oil made from Saffron flowers that contains the sought after three stigmas.

These threads must be picked from each flower by hand, and more than 75,000 of these flowers are needed to produce just one pound of Saffron filaments, making it the world's most precious spice. Saffron is used both for its bright orange-yellow color and for its strong, intense flavor and aroma. Try this and you will love the scents.

The word saffron derives from the Arab word zafaran, meaning yellow, and it was mentioned as far back as 1500 b.c. in many classical writings, as well as in the Bible. Further derivations come from the Old French safran, Medieval Latin safranum, and Middle English safroun.
Saffron is harvested from the fall-flowering plant Crocus sativus, a member of the Iris family. It is native to Asia Minor, where it has been cultivated for thousands of years to be used in medicines, perfumes, dyes, and as a wonderful flavoring for foods and beverages.

The red-gold threads were also highly prized by pharoahs and kings as an aphrodisiac, yet large amounts produce deathly narcotic effects. The yellow color of paella, bouillabaise, saffron cakes, challah bread, and some curry sauces is characteristically obtained from saffron. Unlike the cheaper turmeric, it can penetrate into rice grains, and a small amount can impart its flavor and smell to the food. Currently, saffron is one of the most expensive spices because it requires labor-intensive harvesting. The medicinal uses of saffron in the past included its general employment as an antidote against poisoning, a digestant, an aphrodisiac, a tonic, and as a specific for dysentery and measles. In accordance with the Doctrine of Signatures, its yellow color signified its natural ability to treat jaundice. The flowers triple stigma, and the adjacent part of the style yield the spice. Currently some herbalists claim it has anti-cancer and other remarkable properties, but there is no evidence to support such beliefs.
. (source : Wikipedia.com)