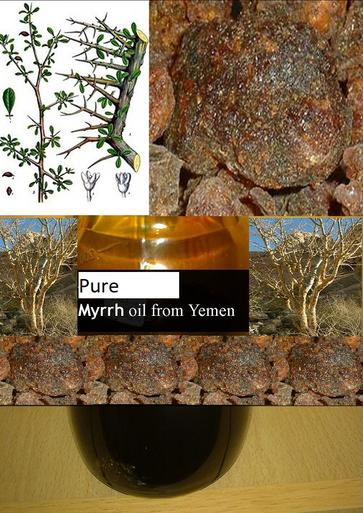 The price is inclusive of shipping, item will be shipped in 12ml glass bottle

It has a super warm, rich, spicy balsamic aroma...origin Yemen

Like frankincense, myrrh comes from the Burseraceae plant family. Native to Northern Africa and the Middle East, particularly in Somalia, Ethiopia, Arabia, and Yemen, the tree grows up to five meters high, and can be identified by its light bark, knotted branches and small white flowers.  The word "myrrh" comes from "murr," which means "bitter" in Arabic, probably referring to the resin's bitter taste.

Myrrh was very popular among ancient cultures. The Chinese valued it as a medicine, while Egyptians used it for embalming their pharaohs as well as for their sun-worshipping rituals. In fact, myrrh was mentioned in Ebers Papyrus, one of the oldest Egyptian medical texts, dating back to 1550 BC. Even the Greek soldiers made use of this resin, bringing it with them to battle to stop their wounds from bleeding.

To extract myrrh, the bark of the tree is cut, and a yellow sap comes out. This sap dries into reddish-brown, walnut-sized lumps, with a unique sweet and smoky aroma, that are then used to make myrrh oil. Myrrh oil has a brownish color, and a rich, smoky and balsamic aroma.

Both myrrh resin and myrrh oil have a long history of medicinal use, valued for their wound-healing properties. Egyptians used myrrh to treat hay fever and heal herpes.

Myrrh oil has also been used as incense and a holy oil in religious rituals and ceremonies for over 5,000 years.

Maintaining healthy skin is one of myrrh oil's renowned uses, as it slows down the signs of aging and soothes cracked or chapped skin. This is why it's commonly added to many skin care products today.

Myrrh oil is also used for:

Myrrh oil is also a valuable aromatherapy oil that can be used for massages, mixed in bathwater, or simply applied on the skin. You can also: