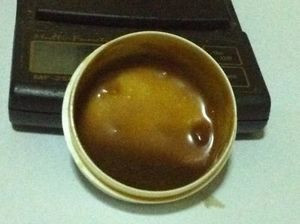 Similar packing shown in the picture (in container or in glass container).

This is a 3g of Nepalese MUSK paste made from Nepalese Deer Musk by Nepalese villages up in the mountain ranges with SpermWhale Ambergris and have been kept for long time. This can be use as perfume or touch on perfume. The scent is super beautiful with long lasting scents. You can also enhance your other perfumes by adding little of this paste.

If Jean Poison would have been alive, this would be her favorite. It was made known in a documentary that Jean Poison was using perfume made from deer musk black grains and 20 years after her death, her bedroom still has the scents of this deer musk perfume.

Historically, the primary commercial use of ambergris has been in chemistry, although it has also been used for and purposes. Ambergris is one of the most important amber type odorants and is highly sought.The Ambergris is produced by the Sperm whale and is present in of all the ancient pharmacopoeias. Ambergris has a very typical scent, animally but of great sweetness that seduces particularly feminine noses, who instinctively recognize the odour that will attract males. In fact, Ambergris, like all aromatic substances of animal origin, is a pheromone and acts directly on the hormonal system through the sense of smell, without physical contact.

The price is inclusive of a 9 to 15 working days delivery of standard air mail to anywhere in the world. We are wholeseller for Ambergriss, Aloeswood, Santolum Album/Sandal wood, deer musks, frankinscene from Oman and pure Yemeni's Honey. We provide wholesale price for bigger quantities.