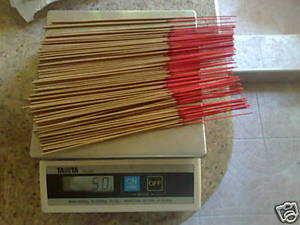 The picture only shows 50grams but this excellent price is for 500 grams of Cambodian Agarwood/Aloeswood/Kyara incense sticks (some variant in colours due to the agarwood chips used) . (Free SingPost standard Shipping to anywhere in the world delivery between 9 to 15 working days but subjected to your local custom clearance and the efficiency of your local postal agency). If you want EMS speedpost delivery, pls ask for quatation.

Aloeswood oil is known for bringing relaxation of the mind, warm the heart & calm the mind, it is a truly uplifting experience and open an avenue of peace and contentment. Aloeswood is very rare and pure quality like ours are even difficult to obtain.

Agarwood is the heartwood from trees, large evergreens native to southeast Asia. The trees occasionally become infected with a parasite mould and begin to produce an aromatic resin in response to this attack. As the fungus grows, the tree produces a very rich, dark resin within the heartwood. It is this precious resinous wood that is treasured around the world. The resin is commonly called Jinko, Aloeswood, Agarwood or Oud and is valued in many cultures for its distinctive fragrance, thus it is used for and .

One of the reasons for the relatively rarity and high cost of agarwood is the depletion of the wild resource. The odour of agarwood is complex and pleasing, with few or no similar natural analogues. As a result, agarwood and its gained great cultural and religious significance in ancient civilizations around the world.

Formation of agarwood occurs in the trunk and roots of trees that have been infected by a parasitc mould, Phialophora parasitica, a dematiaceous (dark-walled) fungus. As a response, the tree produces a resin high in volatile organic compounds that aids in suppressing or retarding fungal growth. While the unaffected wood of the tree is relatively light in colour, the resin dramatically increases the mass and density of the affected wood, changing its colour from a pale beige to dark brown or black. In natural forest only 7 % of the trees are infected by the fungus. High quality resin comes from a tree's natural immune response to a fungal attack. It is commonly known as agarwood #1 (first quality). (Sources: wikipedia)

In the world, Aloeswood is the most prized of all incenses, and the purest Aloeswood is pound-for-pound more expensive than gold! Aloeswood trees have sweet-smelling flowers, and are native to Northern India, Laos, Cambodia, Burma, Malaysia, Indonesia and Vietnam. When an Aloes tree has fallen (from natural causes), a dark resin forms within its heartwood. This resin forms as an immune response, and the heartwood is then harvested for incense and medicinal uses. The older the tree, the better the quality, and the more expensive the wood. Aloeswood incense is used for both medicinal and spiritual purposes.

As a medicine, it is a remedy for nervous disorders. For non-medicinal purposes, it is used to help people get in touch with their spiritual side, and thus, it is in high demand as a meditation aid. Those who use aloeswood incense claim that it has a great calming effect on the mind. But Aloes isn't just for medical and spiritual uses. Many feel it is a powerful aphrodisiac, and in some cultures the women scent their clothes as well as themselves with it.