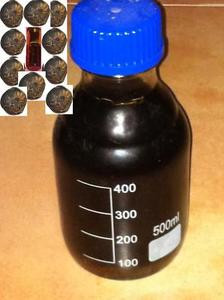 This is a 3cc of MUSK: Siberian Wild deer musk oil - non alcoholic made from 100% Siberian black grains musk which is stuck on the skin of the musk deer musk pods and also the skins of the musk pods which has strong scents in our Mysore mature sandalwood oil. When we extract the black musk from the deer pod, we keep the skin and soaked it into our mature sandalwood oil. Over the years, the scents develop and its an experience that we are opening it up to u. This oil is preserved oil for many years and made from time to time. It has a very nice natural deer musk scents.

The price is inclusive of a 9 to 12 days delivery of standard air mail to anywhere in the world. We are wholeseller for Ambergriss, Aloeswood, Santolum Album/Sandal wood, deer musks, frankinscene from Oman and pure Yemeni's Honey. We provide wholesale price for bigger quantities.